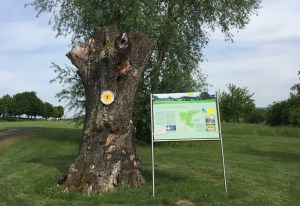 The next natural monument has been found: In the GC Kirchheim Wendlingen near fairway 9 there is this trunk of an old summer linden tree from the year 1648, the crown and branches of which unfortunately had to be removed. It was planted in 1648 as a peace lime tree after the Thirty Years’ War. The tree is the remaining end tree of a historical one-sided avenue of lime trees on the way down to Bodelshofen and has been a registered natural monument since 1941. For safety reasons, the crown had to be cut down to the trunk in 2012. However, the club had already planted a replacement for the 20th anniversary of the golf club.

The Jakobsweg leads through the course of the GC Kirchheim-Wendlingen, which also takes part in the campaign ” Lebensraum Golfplatz – we promote biodiversity” of the Baden-Württemberg Golf Association in cooperation with the state’s Ministry of the Environment . This also ensures the interest of many non-golfers.

Do you also know a golf course with a natural monument? Then send us a picture and tell us briefly which hole it is and what exactly it is: a tree, a special meadow or perhaps a natural monument, such as the Sandberg in GC Hubbelrath.