Golf courses give bees a chance 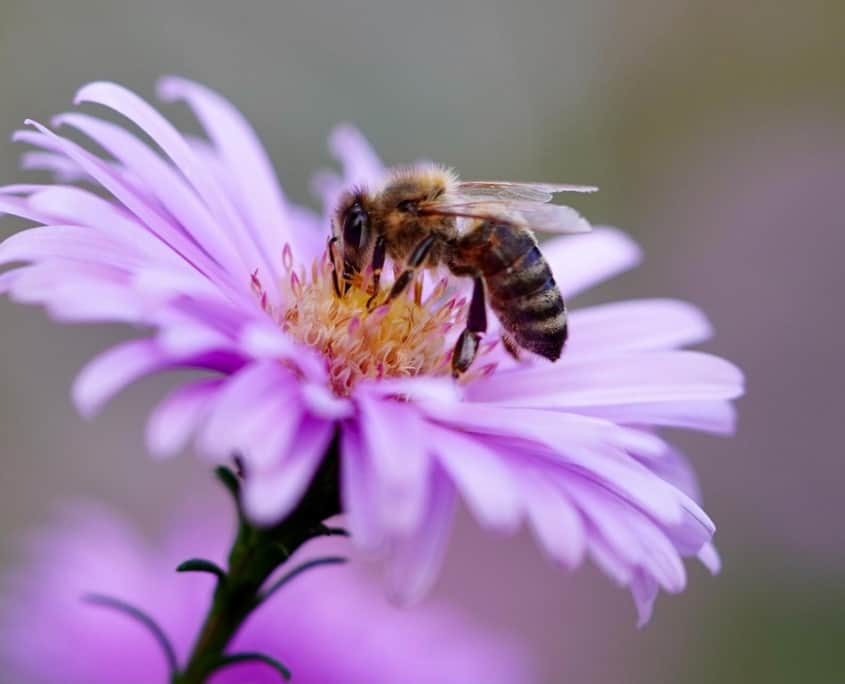 The species-appropriate keeping of bees on the golf course takes on a significant role in the topic of biodiversity. No wonder, then, that the promotion of bees on golf courses plays an important role throughout Europe. Before the winter of 2022/2023, we wanted to know how the health of bee colonies is doing in Germany. To this end, Golf Sustainable has launched an exemplary survey among the 26 golf clubs in Bavaria that are represented in the “Blühpakt Bayern”. They rely on different concepts when it comes to bees.

There are differences in the number of colonies and in the cooperation with specialists. Experts from the beekeeping industry will provide operators and golfers with valuable tips on how to behave, outline current developments, offer a guide to keeping bee colonies before the upcoming wintering period, and provide information on disease patterns and important procedures for beekeeping. An overview of the current status on the topic of bees on selected Bavarian golf courses.

According to reports from the Länderinstitut für Bienenkunde, a research institute for bee biology supported by five German states, beekeeping in Germany has generally declined sharply over the decades. According to the institute, while more than two million bee colonies were still kept throughout Germany in the 1950s, only a good third of them are now. “Climate change is making itself felt,” says Markus Böhner, bee specialist and bee expert from the Upper Palatinate, referring to the 2022 drought, which in some places led to lower nectar yields for plants.

The German Beekeepers’ Association (DIB), however, speaks of a somewhat larger quantity of around one million bee colonies in Germany. Of these, about 200,000 bee colonies and about 33,000 beekeepers organized in the DIB were accounted for by Bavaria in 2021, which accordingly has the largest share among the German states.

The top dog in beekeeping among German golf courses is GC München Eichenried, which says it has more than 100 bee colonies on its course, which are looked after by beekeeper Willi Hermann. At the other 16 Bavarian golf clubs that responded to Golf Sustainable’s inquiry about bees on golf courses, between one and ten bee colonies are kept on the club’s own golf course.

On average, there are just under five peoples on the course without the Eichenrieder plant (at the Erding-Grünbach Golf Club, there are also another 25 peoples directly on the adjacent neighboring property). This is slightly below the national average of 6.7 bee colonies that every German beekeeper currently owns, according to DIB data. Two facilities reported not keeping bees at all on their own facility for various reasons.

Especially in the winter months to strive to avoid the classic diseases of bees. In this context, experts primarily mention two common clinical pictures. On the one hand, a special diarrheal disease (“dysentery”), which occurs at the end of winter and spring and which can lead to the death of entire colonies due to pathogens in the feces. Clogged flight holes, frequent weather changes, or unsuitable winter feed are cited as common causes of this disease.

The second disease that occurs not very rarely is the germination of the so-called Varroa mite, which makes bee colonies more susceptible to infestation by viruses.

In general, Böhner recommends keeping at least two bee colonies so that one does not have to start from scratch again in the event of a loss of a colony, which can never be completely ruled out (e.g., if the queen bee is lost). In view of the increasing complexity of keeping the animals due to the addition of increasingly different degenerated viruses, beekeeping has become more and more difficult over time, according to the expert. That’s why Böhnert advises against clubs keeping bees on their own. At least as a sponsor one should get a beekeeper on board as an expert.

According to Böhner, bees on golf courses, like their counterparts elsewhere, need one thing above all else: “They need a place to rest,” Böhner explains. A distance of about 30 meters from all other areas was therefore chosen at the Golf- und Landclub Oberpfälzer Wald, which Böhner oversees. This is because only a few disturbances can prevent a reduction in body temperature in the insect, which can be fatal for bees in cold weather.

In addition, sunlight should always be available at the location of the hive to keep the flight holes free of frost so that the bee has an opportunity to defecate outside its own burrow, thus keeping potential pathogens away. According to the expert, an orientation of the hives according to the cardinal direction is less relevant. Rather more important is fencing so that mice, raccoons or other harmful animals do not come near the hives and cause them damage.

Recommendations for the spring

Michael Ruhdorfer, an organic beekeeper officially certified by ABCert, generally recommends the creation of diverse flowering meadows for golf courses for the period after winter, as is the case with the bee colony he looks after at the Wörthsee Golf Club in the Starnberg district. Linden blossoms, maple trees, and dandelion and canola fields, for example, are conducive to nectar yield, he said. “The important thing for the bees is that they then get out of winter quickly,” says the beekeeper, who also offers so-called bee sponsorships to private and corporate customers.

For wild bee species such as bumblebees, he said, it is necessary to think not only about hiding places such as bee hotels or deadwood piles, but also about the appropriate flower for each species. Compared to honey bees, wild bees are not as adaptable.

If golfers do hit a ball near beehives, Boehner has a simple tip for such a situation, which is to stay calm. You should not get hectic, that could already worry bees. “Otherwise, bees don’t usually sting just like that,” the expert explains. Choosing the right location for hives well away from the fairways is the best step you can take to keep golfers out of the reach of bees while playing in the first place.

Premiere for the Sustainable Golf Week organised b

Floods, hail, mudslides - how do you build resilie

A tribute to #herbkohler, who made incredible golf

How often do golf courses use recycled water for i