Heath is back in fashion. The herb, which has given many traditional golf courses in Great Britain an unmistakable character right from the start of their design, has not always had it easy in recent decades. In the course of redesign measures or the reduction of greenkeeping effort, many golf courses said goodbye to large heath areas. The golfer didn’t always find that regrettable: After all, the ball is difficult to play from the shaggy growth. A ball in the rough from heath usually only flies a few meters onto the fairway.

In the meantime, the approach has changed: Heath areas are essential for the character of the course on world-famous traditional courses such as Sunningdale or Walton Heath in London. Restoration projects such as those currently at the Woking Golf Club in London are increasing. Prime new projects such as Les Bordes in France are seeding and planting heather in new areas. 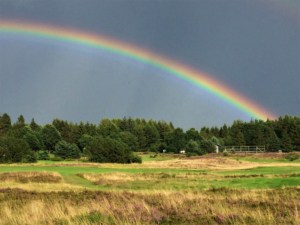 Looking at northern Germany shows how difficult and labour-intensive dealing with heather is. At GC Lohersand , about half an hour from Kiel, the view of the huge heathland is overwhelming for the visitor. The heather stretches over 13 hectares and, with its constantly changing colours, determines the atmosphere of the first-class, traditional course in the flat landscape. “It just doesn’t work without the heather,” says Head-Greekeeper Hartwig Klein and then gives a brief insight into the work that is caused by the undoubtedly beautiful areas of broom heather.

“On the one hand, we have to toil away at the old areas again and again. This means they are cut down to the ground to regenerate the heath. That can take three to four years.” The method of burning, which is used in parts of the Lüneburg Heath, is out of the question for the Lohersand golf course, which has gold certification in the Golf & Nature program of the German Golf Association . “We have a huge number of trees around the fairways,” explains Vice President Stephan Dörsam. Burning it down is out of the question for fire safety reasons.

Heath becomes overgrown if the care is not appropriate. Sheep that graze between the areas are therefore ideal. They were also in use in Lohersand for years. In the meantime, however, shepherds on state land are receiving higher financial compensation, so the club is currently looking for a new shepherd with its Heidschnucken herd.

While the club operates an older area with golf holes dating back to 1959 and the architect Bernhard von Limburger, there are also younger holes from the year 2000. The sowing of heather was part of the approval process. According to Klein’s experience, the development of such heathland is not easy. “In some areas, the barren soil has been mixed with richer parts, so that grass has also grown in addition to the heath. We are now constantly busy ridding the heathland of these plants and thinning them out further,” the greenkeeper sums up. The heath likes it low in nutrients.

Parts of the toiled heath are spread on areas that need to be further upgraded. There, the particles are easily worked into the topsoil so that the plants can develop. This is also a lengthy process that takes years to calculate.

“When I started here 17 years ago, I didn’t know the heath and its special features at all,” greenkeeper Klein remembers when he started out on the Lohersand golf course. He is now an expert on the subject of heathland. He has developed a feeling for the areas and knows the growth and problems of the plants very well. “The drought three years ago is still noticeable in the plants today,” he sums up, looking back at 2019.

He has already prepared the heath for this season. The toiling happens early in the year between January and March “so that we protect the animals on the heath”. It will bloom in a few months. The colors range from strong purple to light red. A sea of colour that makes up for a lot of extra work.

Schleswig-Holstein is committed to progress in biodiversity

Autonomous mowing is the future model in the golf

GC Tuniberg: 90 hectares of natural oasis in the Black Forest