At four in the afternoon, Georg-Wilhelm von Oppen quickly climbs up the ladder and inspects the roof of the outbuilding. “You always have to go up there to see what’s still missing on the construction site,” summarizes the President of the GC Freiburg. New solar panels glitter in the light on the roof. “29 kwh of power – we are currently working on an energy concept,” says Oppens. “Now we are first collecting precise data on where exactly we consume electricity, water and heating and then work out an optimized application.” The new photovoltaic system is just as much part of the planning as an e-charging station in the immediate vicinity, which is to be fed with solar energy.”

Projects have been lined up at GC Freiburg for years. The fact that the flagship club from the Black Forest, which was awarded golf as part of the DGV Golf & Nature program at the beginning of March 2022, is also taking part in the “Habitat Golf Course” project of the Baden-Württemberg Golf Association is only a logical consequence. “For me, this is a sustainable golf course in every respect,” sums up Marc Biber, Head of the Environment and Maintenance Department at the German Golf Association. “Here you manage to uphold traditional values while at the same time thinking progressively and working according to the latest standards.”

Teamwork at the highest level, so to speak, which in the case of “Golf & Nature” and “Habitat Golf Course” between the board member Georg von Oppen, Club manager Rossini Postiglione and the greenkeeper Hubert Löffler, who points to two other factors of success: “I’ve been here for more than twenty years and only had two presidents. You notice the continuity.” And: “Last year Mr. von Oppen walked across the course with a few friends and spent hours stabbing Poa on the greens. What president still does that?” 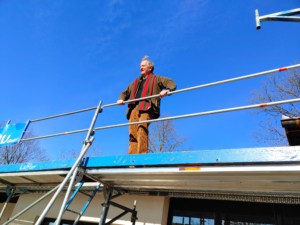 Von Oppen is no friend of self-adulation. He would probably describe himself more as a critical spirit. But at least in one point he points to a larger community achievement of the club management: The golf course is partly in the water protection area, which led to numerous special features and an often difficult approval process when the courses were redesigned in recent years. The golf club got involved in many ways to convince the authorities. A new flood trough on the driving range with a capacity of around 1400 m³ serves as a catch basin. The design of the new lanes was planned in such a way that when the neighbouring water overflows, enough water can spread to lanes 1 and 2. A hole that led over the water protection area was completely resolved.

The water protection area causes a lot of work in greenkeeping: “If we want to apply a spray, we have to mark the area precisely, visit it on site with a representative of the authorities and apply for a special permit,” explains Löffler, who then also documents this precisely. “Of course it’s an enormous effort,” admits Marc Biber. “On the other hand, you already have the issue under control, while many other clubs will still have to deal with stricter requirements in the area of water management in the future.”

The club also scores with its species-rich meadows. “Actually, we haven’t actually done anything for years, apart from mowing once and then driving away the mowing material,” sums up von Oppen, looking at the largest nutrient-poor grassland along the Dreisam river. It is so valuable that the seed is sorted out of the mowing mass and then spread on some species-poor meadows outside the golf course to ensure more biodiversity there. This project will continue in the years to come. “The next monitoring experts will come in June,” notes Postiglione. The Freiburg GC is excited about the result. The nutrient-poor grassland with its innumerable species has meanwhile become a hobby of the club management. The game of golf itself and the golfer are still number 1, but not only Georg-Wilhelm von Oppen discovered the golf course as a living space for himself.