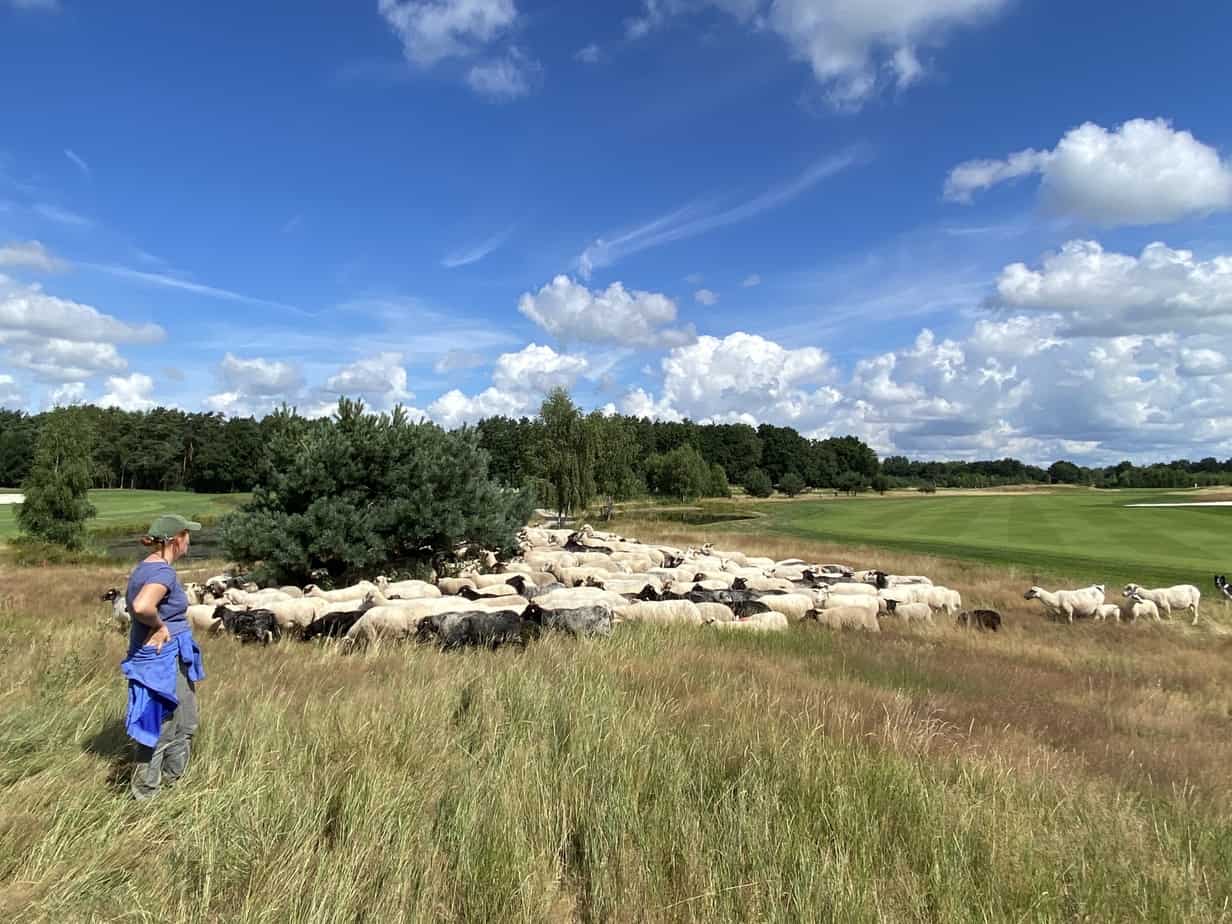 Somehow there were more and more – the chickens, the sheep, the goats, the ducks, the dog. The Green Eagle golf course on the edge of the Lüneburg Heath is her home. It is one of the German flagship courses that interested golfers know as the venue for the Porsche European Open, which takes place there on the Porsche North Course . That alone leaves no doubt that the 36-hole course is primarily about high-quality golf.

In addition, however, it is a natural and sustainable approach to the management of the facility that is important to Alexandra Schöning and Michael Blesch as operators. In this respect, it is also about animals. For example there are around 300 chickens, which tie up a good one and a half hours of work every day, but which are an integral part of the “Green Eagle Nature” project, to which Schöning and Blesch have been committed since 2016. “We simply have an issue with animal husbandry,” explains Schöning. Natural and regional animal husbandry is important to them, which is why they have become active in chicken husbandry themselves. Those who stop at the gastronomy eat eggs and chickens from “Bleschi’s Chicken Club”. The vegetables come from farmer Peters next door, meat, poultry and sausage products from organic farms in the region.

The Herford cattle bred by Hans-Dieter Albers family graze behind the first tee of the Porsche Nord Course – “Luhdorfer Weiderind” is the technical term that can be found on the menu. The ducks live near the machine hall, the sheep and their shepherdess move all over the site anyway.

Almost all of the dishes on the menu at the golf course are “100 percent prepared from food that comes from extremely natural animal husbandry, has been grown regionally or is organic,” the operators explain. This costs money because it is labour-intensive and not designed for mass. “In the beginning, our members swallowed a little because the prices were higher,” Schöning sums up. “They’re used to it now.” Anyone who has understood the overall concept and always somehow encounters the animals during the round of golf, begins to develop an understanding of the approach.

This also applies to the sheep, around 500 in total, which come from Nicole and Holger Benning’s Wümmeniederung sheep farm in the Lüneburg Heath. The sheep farm mainly takes care of the preservation of old breeds, which is why you not only come across the well-known Heidschnucke sheep in the Rough of Green Eagle, but also Bentheim country sheep or Coburg fox sheep.

Sheep provide for clearing in the rough

Sheep are often used on golf courses. They take on part of the greenkeeping, especially in the rough area, because they are enthusiastic about dandelions or daisies, for example, which keep areas light and thin. From time to time, the two herds that are spread out on the Porsche North Course and the South Course end up on fairways and greens. No problem let the owners know, the sheep’s sharp hoof claws ensure that the sprouts of the grass roots are cut off and new stalks grow. In order to avoid colliding with the golfers, the herds stay in the areas beyond the pure playing area anyway.

The shepherdess, who took over the supervision of the two flocks at the beginning of August, now not only knows the preferences of the sheep but also the customs of the golfers. You get along well with each other. 500 sheep on a 36-hole course – no problem, is the conclusion of Schöning. In the end, keeping animals on the golf course is a question of attitude, flexibility and will. In any case, a way has been found at Green Eagle to include animal welfare in the club concept. It’s extra work, but somehow it just makes you feel good.

Around the world: CO2 compensation for professionals
Scroll to top