Harald Walter sees himself as a golf pioneer. “I had the first truly public course in Germany here, I started with a par 3 course,” recalls the owner of Golfoase Pfullinger Hof as he ponders the development of golf in Germany in the courtyard of his facility. He has since converted 50 acres of farmland into a golf course, and the par-3 layout has become an 18-hole course. In 2008, the machine hall including the clubhouse burned down. Even that didn’t stop him: “When everything has burned down, you can just plan everything anew,” he says today. 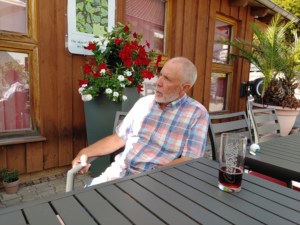 “I always wanted a golf course for sports and nature,” he says, explaining his concept. The Golfoase is a golf course for everyone. Not a high-end product, but a simple system with a lot of atmosphere. Campmobile parked in the greenery between hedges and trees. He has planted meadow orchards. Most recently, a butterfly trail was developed with NABU. It is therefore a matter of course for Walter that the Golfoase participates in the Golf Course Habitat campaign.

He seeks exchange with nature conservation groups, politicians and associations. The NABU has recently again made a picture of its bees, the butterflies, the biotopes within the framework of an excursion. This cooperation is uncomplicated, says the operator of the golf course. The original prejudices against the elitist sport of golf, which he also encountered here in rural Heilbronn in the 1980s, have been dispelled.

With his motto “I want to be different from the others,” Walter, who also likes to sit on the machine and help out in greenkeeping, has made many friends in the region. The CDU member of the state parliament Michael Preusch, for example, who organizes the hiking trip of the CDU state parliamentary group in September, will also make a stop at the golf course with the almost 100 politicians. One more opportunity for Walter to demonstrate that golf & nature go well together.

Since 2013, the Golfoase Pfullinger Hof has been awarded the highest rating of Gold in the Golf & Nature quality management program of the German Golf Association. After all, the slightly hilly terrain is home to many an amphibian or butterfly species that would probably not have felt at home in the fields that were here before. “We have planted over 5000 bushes and trees,” he says, summing up his activities. A bee meadow was planted at hole 7, along with a Benjes hedge and, of course, the insect hotel.

Environmental education certainly plays a role at the golf course: “We already have some registrations for the new school year,” Walter registers with satisfaction. The butterfly trail with its information boards is perfect for the children, who in this way get in touch with golf in a very informal way. “Breaking down barriers was my concept from the beginning,” Walter recalls of his early years. He has managed to do that very successfully.

Premiere for the Sustainable Golf Week