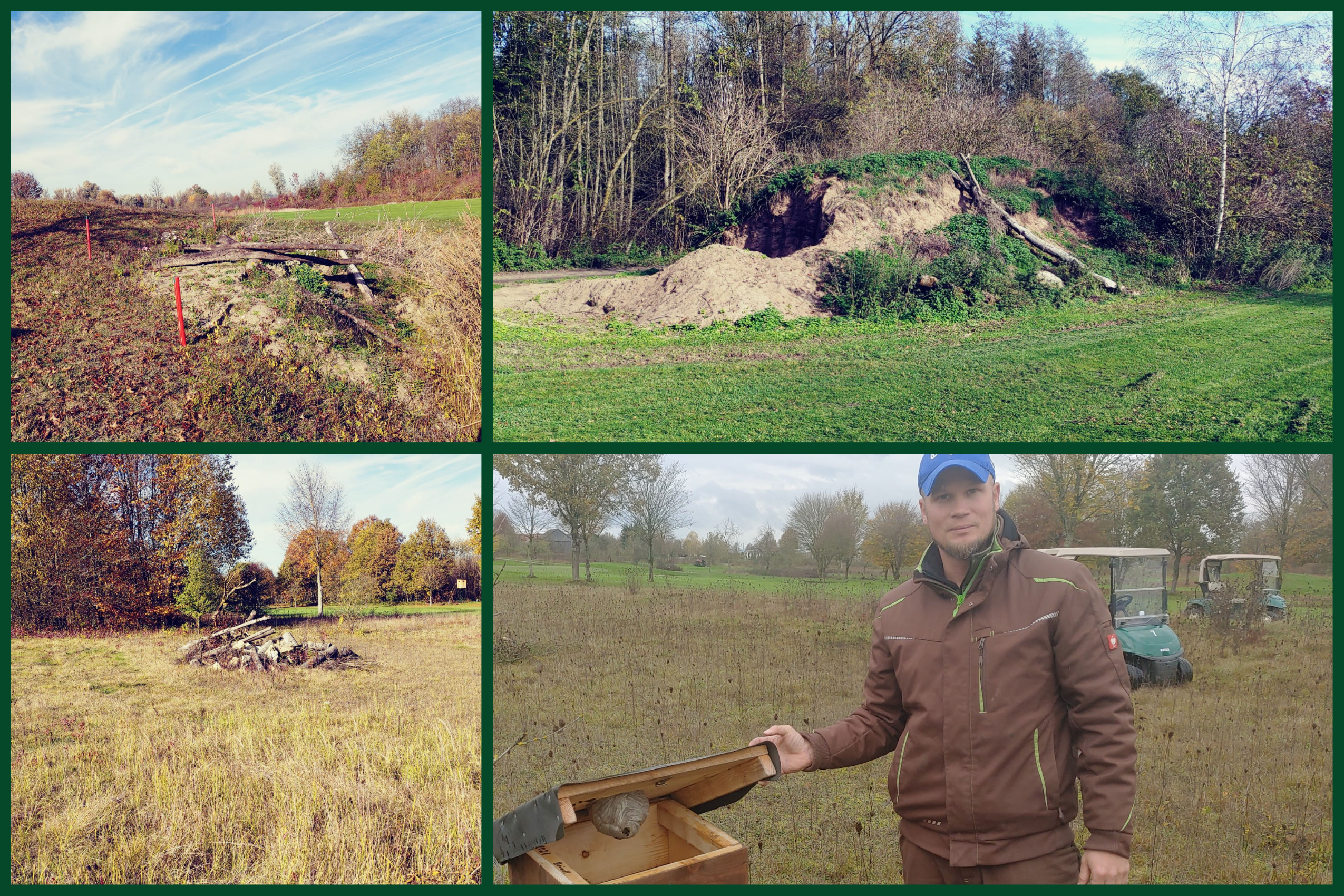 In his daily work on the 24 holes of the GC Gäuboden near Straubing, Roland Färber differentiates between duty and freestyle: “Course maintenance is the duty program.” When it comes to projects around the Blühpakt Bayern, the Head-Greenkeeper talks about the freestyle. For Dyer, who is known for the excellent condition of the greens he oversees, all projects around the topic are voluntary, depend on his personal commitment.

Support by the LBV

The kingfisher is a permanent guest at the 120-acre site in the lower Danube floodplains because it feels at home along the lush flora of the ponds. Golfers have long been accustomed to deadwood piles, but it has taken longer to gain an understanding of rough grasslands. “Communicating the nature theme is difficult,” Dyer has learned. “People actually praise the greens more.” However, the Landesbund für Vogelschutz, which looks after the GC Gäuboden as part of the Blühpakt, has been enthusiastic about his sustainable course maintenance program right from the start. Large-scale rough grassland meadows, such as can be seen here in the middle of the 120-hectare site, are otherwise considered a rarity. Here you can find lichens and mosses, multicolored grasses and flowers. If you come to the end of autumn, you will encounter a variety of brown tones that fascinate.

“It’s best to do little or almost nothing,” explains Färber, referring to the plants. He has introduced strip mowing and sickle mowing in the Gäuboden GG, and uses the bar mower to mow the individual rough areas, which have developed excellently, a maximum of twice a year. “It’s really great how it looks in the meantime,” is Wolfgang Erhardsberger’s assessment. The Erhardsberger family of operators discovered the value of the green adjoining areas in the second step. First of all, it was about the operation of a functioning golf facility.

In fact, however, the Head-Greenkeeper’s sustainable approach also leads to success with other issues. “We maintain extremely low water,” explains Färber. Once it gets extremely hot, the fairway grasses are at 18 mm instead of 14 mm. “We also don’t fertilize for growth,” he continues. The more grass growth he has, the more he has to mow, dispose of clippings.

It’s an approach he’s developed over the past decade, after root rot caused him to lose up to 40 percent of his greens in some cases. Since then, he’s been working on the long-term health of the greens, dialing down irrigation and fertilization a lot. In the spring, he specifically uses liquid fertilizer to give the play areas a proper boost, after which the areas learn to make do with few resources. They are obviously succeeding splendidly; the healthy root system is reflected in first-class putty surfaces.

Greens, tees and front greens are mowed with electric mowers at GC Gäuboden. The club is also up to date in terms of energy. Photovoltaics have been used here for years, and the company’s own groundwater heat pump has been in operation for around 20 years. The rainwater from the roofs of the various buildings drains into the large pond in front of the clubhouse, as does the water from the parking lot. The combination of collection and low consumption has also meant never having a water emergency here in years past.

Färber is obviously not running out of creativity in dealing with the 120 hectares of nature, including two golf courses: In any case, ideas bubble out of him in abundance as he explains his approach to greenkeeping. At the end, he stands on the 6-fan short course and looks critically at the putting surfaces. In a way, this short course is his test area. But even with this: little water, little fertilizer – saving resources is the program.

BGV extends bloom pact with Ministry of the Environment