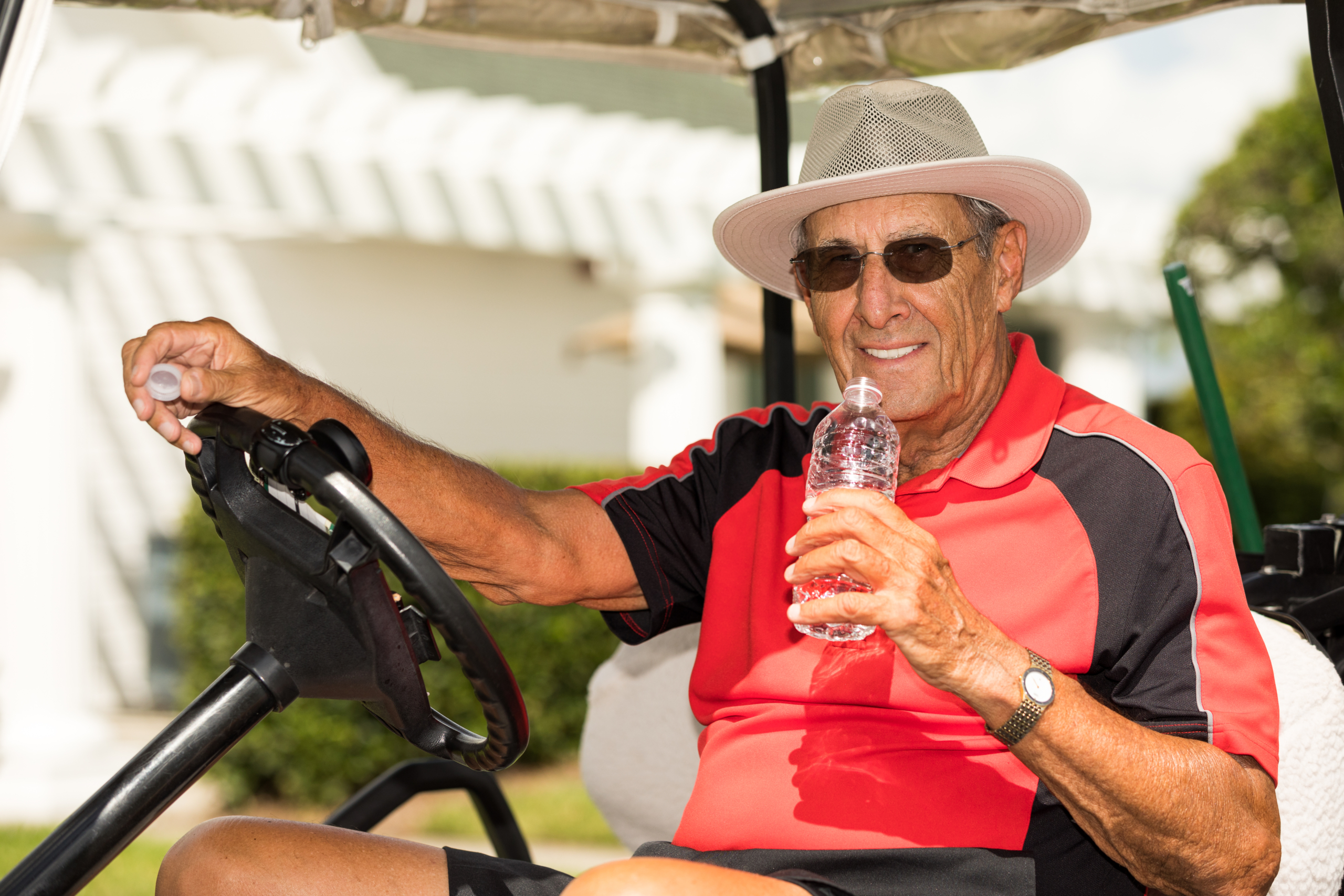 For top golf clubs, the plastic bottle is a no-go

At Valderrama Golf Club, it’s clear: plastic bottles are taboo. The same applies to the Heritage Resort in Mauritius, the Sentosa Golf Club in Singapore, the Princeville Golf Club in Hawaii and the Els Club in Dubai. Golf facilities that rank among the world’s leaders are addressing the plastic problem.

Until now, there was only one rule on golf courses worldwide: get into the golf cart – and there it is: The plastic water bottle. Whether in the USA, Thailand, Greece, the United Arab Emirates or Portugal. Service to the golfer means his supply of water for the round. Mind you, water from a plastic bottle. For an 18-hole facility in the Mediterranean or hot climate, one can assume consumption of about 100,000 plastic bottles per year; for 36 holes, 150,000 plastic bottles is an average value. The number is significantly reduced on golf courses without carts because many golfers bring drinks from home. We also must distinguish between plastic bottles made of single-use plastic, which is essentially no longer permitted in the EU, and PET bottles, which are subject to a deposit and automatically enter the recycling process.

In some countries, however, golfers react more and more sceptical to plastic bottles. In a survey conducted by Golf Sustainable and the University of the Federal Armed Forces in Munich, 74.2 per cent of German golfers said that preventing plastic waste on golf courses was important. 58.85 per cent reported bringing their refillable bottles from home. Nevertheless, PET plastic bottles are standard at tournaments here as well.

Plastic pollution as a global problem

Plastic waste causes problems worldwide. Already, 85 per cent of all trash in the world’s oceans is plastic. The UN Environment Program (UNEP) predicts that plastic in oceans will nearly triple by 2040. According to the science magazine Nature, the annual cost of plastic pollution to society (including recycling and recovery) is over $100 billion annually. “The cost of doing nothing about plastic far outweighs the cost of addressing it,” says Lindsay Godfrey, a senior scientist at the Council for Scientific and Industrial Research in Pretoria, South Africa.

Plastic is also an economic factor for a golf club or resort. After all, the water bottles must first be purchased or filled, then stored, distributed to the carts, sorted out again, emptied of residual water, and then disposed of in the trash. Waste disposal then still costs money. It also negatively impacts the CO₂ footprint of a golf facility. It is considerably less expensive for the golfer to bring an aluminium water bottle and draw water from a water station.

Within the golf industry, there is growing pressure on operators to address the plastic problem. Although leading golf resorts, such as Pebble Beach, Gleneagles and Pinehurst, repeatedly go public with sustainability measures, the plastic problem is immanent at their facilities.

At the same time, other prominent golf facilities make it clear that plastic can certainly be avoided with the right strategy. At Valderrama Golf Club in Spain, plastic bottles are no longer used. Guests and members receive refillable water bottles as a gift. Princeville Makai Golf Club on Kauai also decided in 2020 to eliminate water bottles on the carts and at the halfway station. Instead, golfers can either use a paper cup made from recycled material, purchase a refillable aluminum bottle for three dollars or bring their own containers. Savings: Over 50,000 bottles per year. “Having been located on an island, we are very conscious of waste. We want to protect our oceans from single-use plastic ending up in them,” explains Michael Neider, general manager of Princeville Makai Golf Club.

Positive approaches from Mauritius to Singapore

The Beachcomber Hotels in Mauritius, like the Heritage Resort, now only use bottles made from plant material that decomposes in the hotels and on the golf course. In the United Arab Emirates, the No More Bottles company is active on a total of seven golf courses. At Els Club Dubai, they have saved around 180,000 plastic bottles alone in the period from the beginning of 2020 to August 2022. Nine water dispensers on the course ensure that golfers can refill their bottles.

“Every detail helps,” summed up Andy Johnston, general manager and director of agronomy at Sentosa Golf Club in Singapore as early as 2018. “The decision to remove all plastic bottles from golf carts will significantly reduce our plastic consumption.” Two years later, however, he also had to say that the switch of golfers was not necessarily easy: “No, at the beginning the idea was not necessarily well received.” In the meantime, the issue has been resolved. Even in Sentosa, golfers can use their own bottles or get refillable bottles in the pro store. These are all positive examples within an industry that otherwise still largely depends on plastic bottles.

What is the future of plastic use?

In the first week of December, delegates from more than 150 countries met in Uruguay as part of the Intergovernmental Negotiating Committee (INC) to negotiate a possible global agreement to end plastic pollution. The focus was also on two essential questions: Can recycling be a solution? How significant are the health hazards that generally arise from microplastics in water, for example? According to Nature, only about nine per cent of all plastic waste is currently recycled. By far, the largest share is burned worldwide – especially in Asia.

Consumers rarely think about the consequences for the environment and health. The golfer isn’t an exemption. Who thinks about the plastic bottle in the golf cart when he starts a round of golf in the Caribbean, in Thailand or somewhere in the south of France? No question, it’s just a plastic bottle. But plastic is a huge problem.