July 14, 2021 will not be forgotten in a hurry at the Schloss Georgshausen golf course in Germany: The storm “Bernd” began on this day. The flood disaster in the Ahr Valley claimed 184 lives in Germany alone. The economic damage cannot be foreseen to this day. According to Robert Paas, insurance specialist, from the point of view of the insurance companies, total damage of 33 billion euros has accumulated. Large parts of the Schloss Georgshausen golf course were flooded, and the paths and bunkers in particular were badly damaged by the water masses.

Floods on golf courses are increasing

Schloss Georgshausen was not an isolated case: at least four golf courses were “very badly affected”, another eight to ten are considered “strongly affected”. Anyone who looks internationally at the topic of storm damage will find that there are golf courses that struggle with extreme flooding every year. In Sydney, Australia , for example, some golf courses were flooded in 2022 for the third year in a row. On the Italian island of Sicily , one of the two golf courses at the Verdura Resort was largely destroyed in 2018 and had to be rebuilt. England has repeatedly struggled with severe flooding in recent years.

Long-term damage to the golf course

The damage can run into the millions and is easily underestimated by laypeople. Thomas Himmel, golf course designer, describes the possible consequences as follows: “Dirt, rubbish and stones from paths can contaminate the drainage pipes. Any stone that gets stuck in the turf can damage mowers as a result. If valves and sprinkler heads are muddy and filled up, they must be cleaned individually. Bunkers usually have to be completely renewed because the drainage no longer works and the sand has been mixed up. And then of course there is the mud on the grass. This has to be removed meticulously because sludge deposits can prevent surface drainage in the long term. Also, if the flooding lasts too long or the mud isn’t removed quickly, the grass will suffocate.”

Golf course specifics are important when it comes to insurance

Massive site works therefore increase the amount of damage beyond the pure flood damage, which is immediately visible. Long-term damage is often the result. For Robert Paas, the settlement of the damage in Germany last year led to the sobering realization that “at least 50 percent of the affected systems were not properly insured.” He also draws attention to the pitfalls of insurance: “We had claims payments that were settled in a very short time. However, we still have an open claims file for a new customer whose policy we had to take over, which is unfortunately due to the insurer’s lack of understanding.”

A year after the Bernd flood disaster, it is clear that flooding will also occur more frequently on golf courses due to climate change. The challenge for the operators of golf courses is, on the one hand, to significantly increase the defenses of the course and buildings against possible flooding, but on the other hand to check their insurance policies. “Renaturalised streams, flood zones, relocating bunkers, significantly improving drainage and raising greens, for example, are typical measures that can be used to cushion heavy rainfall and significantly reduce damage,” sums up golf course architect Thomas Himmel. “Basically, you shouldn’t underestimate the power of water. Runlets on paths and small streams quickly turn into flash floods that cause serious damage.”

“Under no circumstances should we underestimate the challenges in this area,” explains Robert Paas. Three of the most devastating natural catastrophes from the point of view of the insurance industry in Germany took place within the last ten years. In addition to the flash flood Bernd, there were the hailstorm “Andreas” in 2012 and the June flood in 2013.

“In 1992 the total area for settlement and traffic in Germany was 40,335 square kilometres, in 2019 it was already 51,682 square kilometres,” says Robert Paas. The problem of increasing surface sealing is immanent. This means that the area for settlement and traffic has increased by 28.3 percent in the last 28 years.” When it rains heavily, there are fewer and fewer areas that can absorb water.

“In addition, we always find structural changes on golf courses that were not carried out by a specialist company. Maybe because a board member wanted to change something. However, no one really thinks about the question of liability that arises when a construction project has not been carried out properly.According to Paas, this begins with the improper construction of bunkers. “Anyone who does not build in a specialist manner will have a serious insurance problem later on. Then the insurance doesn’t have to pay.” 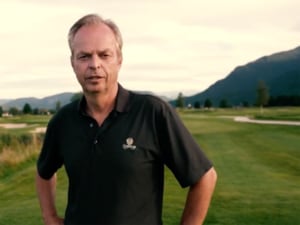 Times are not getting any better with regard to storm damage. A study by Deutsche Bahn, which was commissioned by the Potsdam Institute for Climate Impact Research, predicted an average increase in heavy rain days with at least 20 millimetres of precipitation per day by 3.3 days by 2060. The south of Germany is the hardest hit, with a peak of up to 11.7 days.

These numbers, which at first glance seem very theoretical, should not hide the fact that extreme weather conditions are unpredictable. ” Even small changes in average climate variables can lead to more and more severe extreme weather events beyond threshold values “, the Potsdam Institute for Climate Impact Research states.

A hundred year flood can also come the day after tomorrow

In Australia, where, unlike in Germany, extreme flooding of this kind has been struggling for three years, climate scientists are now so far advanced that they are pointing out to people that the term “flooding of the millennium or century” should by no means be taken literally. When the climate changes, the probability of these events also increases, summarizes Dr. Andrew King from the University of Melbourne . In practical terms, this means that the fact that the golf course suffered flood damage in 2021 does not protect against the next flood for the next 99 years.

Danger of flooding – the most important tips

Preventive measures on the golf course: A risk assessment on the course and experiences from previous severe weather events lead to changes in streams, bunker positions, and path courses. Flood zones and stream renaturation as well as comprehensive drainage systems should be considered.

Check insurance: Find out to what extent your golf course is protected against extreme weather events. Important here is the consideration of golf-specific points such as no sum limit per hectare, consideration of natural hazards and the statement that “first risk is also insured”, which virtually rules out the case of underinsurance.

How much does it cost to insure an 18-hole course? This cannot be stated in general terms. In general, however, you can say that you have to reckon with around 3,500 euros per year for a golf course in Germany. However, as the number of severe weather and storms increases, it can be assumed that the amounts for insurance policies will also increase.

Reduce flooding : Plug-in systems for flood protection that can be set up at short notice are now available on the market. Robert Paas recommends such systems for golf courses that often have to deal with flooding. Also, the facility should have an action plan that enters into the flood plan and regulates what actions need to be taken by which people.

Documenting the flooding: Comprehensive photo series that cover as many affected parts as possible are essential. Since experts are not immediately available in the event of major flooding, videos made with the help of drone overflights also make sense. “Plans of the facility, the path system and well-edited documentation are very helpful when dealing with damage,” says Paas. “Without documentation, making a claim against the insurance company is very difficult.”