A look into the future of greenkeeping is exciting: robots are likely to become the standard on golf courses as well. “Automation will become increasingly important from 2025 onwards. Electrification is a macro trend that we are using to respond to megatrends such as climate change,” noted Sandra Jardeby, Director of Business Development and Strategy at Swedish company Husqvarna at the two-day Living City congress in London. With an expert survey and study, the Swedish company had identified the trends in the future development of green spaces around cities.

Although greenkeeping in golf is still largely based on mowers powered by fossil fuels, it can therefore be assumed that golf will also be extremely influenced by the trend towards electrification and, on the other hand, automation.

Lack of staff also a big argument in the golf business

Lack of staff, noise pollution and CO₂ emissions are the main factors behind the switch from diesel to battery power. In addition, there are ever more stringent legal regulations. In California, for example, all lawn mowers and lawn equipment with small diesel engines will be banned from 2024, as CO₂ emissions from electric equipment are significantly lower. 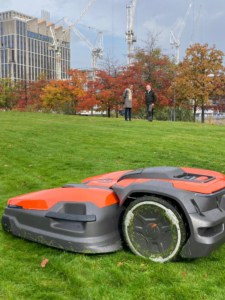 While such laws are not yet current in Europe, the issue of staff shortages in particular plays a major role here. The sales success of the so-called Ceora mowers from Husqvarna, which are small robotic mowers equipped with an extra golf attachment for cutting to a depth of twelve millimetres, apparently came as quite a surprise to the company’s developers this year. Having already sold by far the most classic robotic lawnmowers for the home garden in Germany, the German market is now also setting the pace for golf mowers. “We’re still puzzling over why Germans have such a high affinity for robotic mowers,” explains Yvette Henshall-Bell, president of the Garden and Forest Division, which includes golf, with a smile.

How the major competitors Toro, Jabosen and John Deere will react to the trend towards autonomous mowers in the long term remains to be seen. In the field of small autonomous mowers, there are currently no competing models to Husqvarna’s Ceora mower. Compared to the presence of the big three in the golf market, the Ceora mower’s appearance currently looks like a pinprick. However, the market’s positive reaction indicates that it could become uncomfortable for the top companies in golf.

The future of the mower industry is definitely exciting. Ideally, says Jonas Willaredt, responsible for sustainability at Husqvarna, the state of 100 percent green electrification of the mowers is achieved. On the one hand, this concerns the direct manufacture of the mowers themselves, in which electricity is generated via solar panels. Secondly, supplying the mowers on the respective areas, i.e. the golf course, for example, with green electricity further reduces CO₂ emissions.