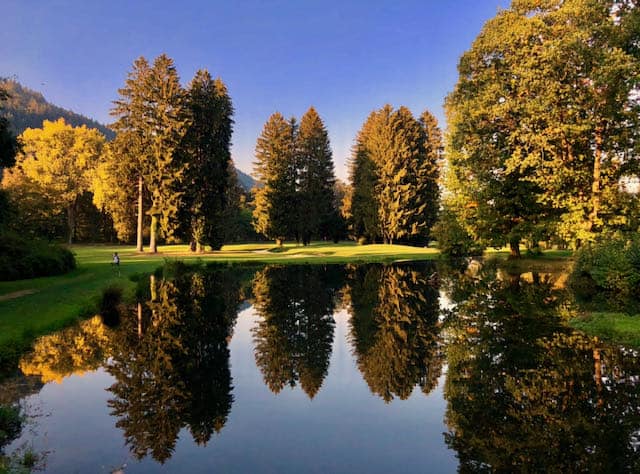 The times have changed. Golf has changed from a popular sport, which can also be seen in the golf courses: it’s about green fee sales, membership models, profitability and the question of how to find good staff. Small 9-hole courses are increasingly becoming lone fighter. in the case of the GC Gütermann Gutach, one does not find a buzzing tourist facility in the Black Forest region, but rather a classic club that, on quick inspection, perhaps would not cause a stir.

Golf has shaped the town of Gutach

On closer inspection, the GC Gütermann Gutach is a prime example of the slogan that the R&A uses in its principles for sustainability. “Golf contributes positively to the well-being of communities when it comes to financial, social and environmental aspects.” In Gutach, as in few other cities in Germany, golf is an integral part of the town.

A look at the nine lanes in the middle of town tells a lot about the history. You will find a park in which huge solitaires gather: black alder and walnut, plane tree and red oak, willow, black walnut, linden, white willow and hornbeam. Many of these are souvenirs from trips to Italy made by one of the founding couples, Paul and Alke Gütermann. In 1924, when ten members of the Gütermann family laid out a 16-hectare golf course on the premises of the then world-famous sewing silk company Gütermann & Co., golf was very exclusive in Germany. In 1927 the British golf course architects Morrison and May rebuilt the fairways. A classic, British-inspired parkland course has remained to this day, which is given its charm by its numerous trees.

From the exclusive meeting point to golf for everyone

As exclusive as the membership and their guests were in the first decades – as part of the community the facility has also achieved a number of things that would not really be associated with golf today: A significant part of the course was used during the Second World War as allotments, on the other part a shepherd with herd was used to ensure the mowing of the lawn and at the same time to produce wool.

The idea of the company golf club, as we know it today from large corporations, came up here as early as 1938, when the company sports department golf was founded, which allowed golf for company members for an affordable membership fee.

All the history can only be guessed at on a round on the course if you look at the stately villas along the golf course, a large part of which was once owned by the Gütermann company. In the meantime, the situation has changed: the company has been sold, the golf course has belonged to the e. V. What remains is the golf course, which has since been changed again and expanded with a new site.

But the charm of the complex is found in the old park, which is sprawling with its large trees. At just 26 hectares, the possibilities for creating biotopes, large areas of water or meadows are small. The care of the trees is the focus here, as Alexandra Gütermann, who is now a member of the board, explains. Their preservation is essential for the park character of the square. This is one of the reasons why people take part in the golf course habitat project. In the end, however, this also contributes to the economic survival of the course: the green fee guests who come here from Switzerland or the region appreciate the established structures, which also reflect a history that is almost a hundred years old.