She is shy, she hides and has only really been under protection in Scotland since 1988: the wild cat, long the favorite object of hunting parties, is now Scotland’s most threatened mammal. Ultimately also because the wild cats also mate with domestic cats.

The world-famous Royal Dornoch Golf Club near the Scottish Highlands, whose logo has a permanent place for the wildcat, is now taking part in the nationwide “Saving Wildcats” project, which includes, among other things, the rearing and later release of the animals in the Cairngorms National Park.

Royal Dornoch launched its own line of clothing in 2019, sales of which raise funds for wildcat projects, first to the Royal Zoological Society of Scotland and now to Saving Wildcats, a European partner program for animal conservation. In the meantime, the sum that has come about, for example through the sale of shirts or sweaters, is around 5,000 pounds. Neil Hampton, General Manager at Royal Dornoch, thanked members for their support. “We have again raised a tidy amount to continue supporting Saving Wildcats and play our part in the rescue of this wonderful animal.” 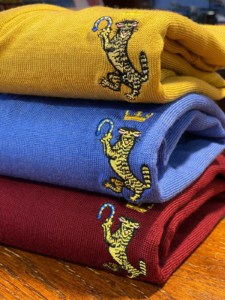