Last Updated on 28. February 2022 by adminGolfSustainable 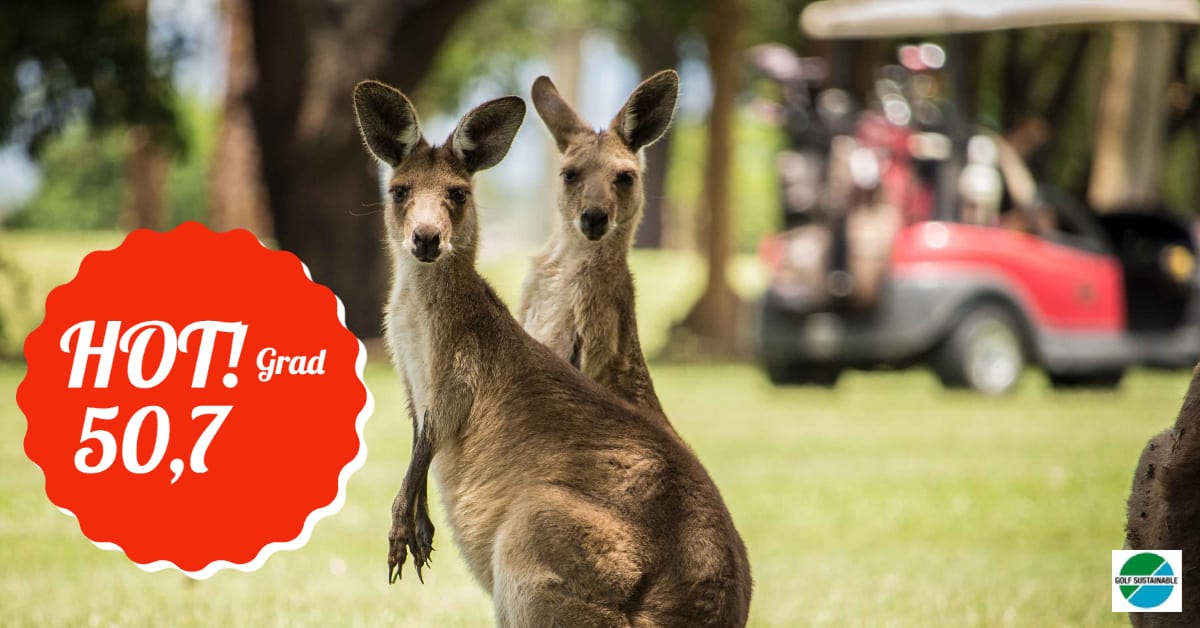 Heat record in Australia: 50.7 degrees Celsius were reported in the coastal town of Onslow in Western Australia on Thursday. The previous heat record from 1962 was broken. Golf is hardly possible in the current heat wave on Australia’s west coast.

Climate change is making life difficult for outdoor sports such as golf, cricket, tennis, horseback riding and rugby. The golf tournaments of the professional tours at the beginning of 2020 suffered from extremely bad air due to the bushfires. England cricket team captain Joe Rott collapsed from dehydration in a match against Australia in 41.9C heat in 2018. In tennis, the Australian Open 2018 was suspended for two days due to extreme heat, and the Australian Football League has introduced an “extreme heat guideline” since 2020, which applies from 35 degrees and 80 percent humidity. The list of negative cases could certainly be continued. Golf Australia has also reacted to the increasing extreme weather conditions and formulated so-called Hot Weather Guidelines , which also include postponing or canceling tournaments when the temperature is more than 36 degrees.

“Game, Set, Match: Calling Time on Climate InAction” is the name of the study by Australia’s Climate Council that fueled discussions about the future of outdoor sports in Australia in 2021. Although golf was not explicitly studied as a sport, similar statements apply to this sport as to tennis or cricket.

50 degrees Celsius in summer as a health risk

“Sport is continuously being cancelled, postponed or shortened because increasing weather extremes in the context of climate change necessitate this” determined the scientists involved in the study and came to the conclusion: This trend will intensify.

“If global CO2 emissions continue to rise, Australia’s sport will change dramatically. Tournaments in summer will take place in the evening or the game schedules will be moved to spring or autumn,” summarized Dr. Martin Rice, Head of Research at Climate Council and one of the authors of the study. This also applies to the various golf tournaments, all of which are already confronted with the fact that the heat waves in Australian cities not only start much earlier – in Sydney, for example, 19 days earlier – but, as in Canberra, have also doubled in length.

periods of drought are increasing

Added to this are the effects of drought, which is also increasing in Australia. The years 2018 and 2019 were the driest two-year period the state has experienced to date. “Drought has many negative side effects on human physique and mental health, agricultural productivity, ecosystems and biodiversity. Drought also affects sport,” the scientists summarized in the study. Golf as a sport, which is practiced on the largest playing fields with lawns, is particularly affected.

With Australia’s sports generating A$50 million in economic output, a growing number of elite athletes, including swimming gold medalist Bronte Campbell , are calling for more consideration to be given to the impact of climate change on sport. After all, the financial impact is also enormous, because the infrastructure of the sports facilities has to be partially adapted and insurance benefits have to be changed for many events.

The operators of golf courses can only confirm that the extent to which golf becomes a risky sport at temperatures of 40 degrees and more is now a relevant topic. Running club, state or professional tournaments throughout the day can certainly become a liability problem. And the handling of large events is becoming more and more uncertain anyway due to extreme weather conditions.