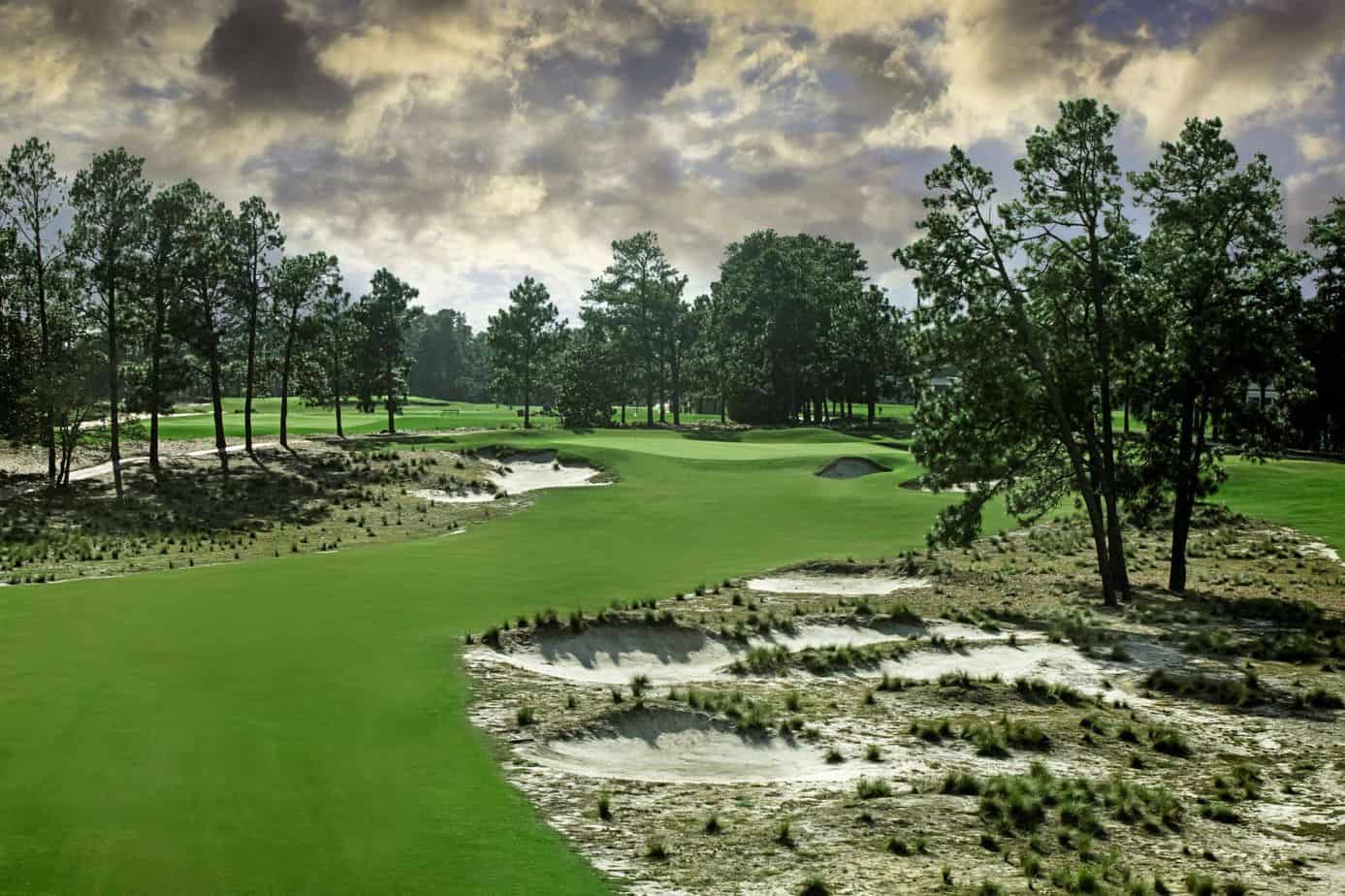 The objective is simple: “Playing conditions are dictated by nature.” It sounds old, outdated, as if from times when high-tech irrigation software and systems did not yet exist. Perhaps, one could speculate, it comes from a place where there is also a lack of financial means to equip the facility in a modern way, to provide it with plenty of reservoirs and to maintain it at a high-tech level.

None of this is true: Pinehurst No. 2 is one of the most famous and best golf courses in the world. An 18-hole course in North Carolina’s Pinehurst Resort that offers a standard round of green fees ranging from $320 to $495 depending on the season. And yet the players queue up.

When Alex Podlogar, responsible for resort communications, says: “ The new mission statement for Pinehurst No. 2 is: The playing conditions are dictated by nature, ” he says of a turnaround in the maintenance and layout of the course that began in 2011.

Redesign with a new philosophy

At that time, the course opened after a redesign by the two American golf course designers Bill Coore and Ben Crenshaw . On the one hand, the team tried to restore the natural and historic character of the Donald Ross course, but also made the 18 holes next to it significantly more resource-efficient.

Classic rough played no role in this approach: fairways have been widened by up to 50 percent, eliminating any Bermuda grass rough that had been introduced in the 1970s. What remained were no longer graded zones of grass, but only two heights of grass – that of the greens and the rest. More than 14 hectares of the area that had previously been irrigated disappeared and were replaced by natural sandy patches, pine needles and tall natural grasses native to the area. More than 200.000 of these tufts of grass alone were planted.

The redesign has dramatically changed the water management of the course, whereby it must be added: On a top course of the caliber of a Pinehurst No.2 in the USA every single blade of grass usually stands up perfectly and deep green. After Crenshaw & Coore had 640 sprinklers removed and stopped the practice of overseeding, which is common in North Carolina, whereby new grass is sown for the winter to displace the then brown Bermuda grass, the situation changed. Instead of the previous 1100 sprinklers, there are now 450, and most of them are found around tees and greens, much less on the fairways.

Golfers who hit the middle of the fairway today will be rewarded with perfect grass. “We ran a whole new row of irrigation through the middle of the fairways,” Bob Farren, director of golf course and grounds management at Pinehurst Resort, told a Golf Digest reporter. “But we knew, we weren’t going to have 100 percent irrigation coverage.” Instead, many of the balls roll into the outdoor areas and sandy area. It’s not high-tech, says Bob Farren. Rather, a return to the original style of play that prevailed in the days of Donald Ross, who completed the course in 1907: “If a ball didn’t land on the fairway back then, it didn’t end up in deep rough. He rolled over hard sand which made the course so unique.”

And: In this way it is extremely resource-saving. In 2009, Pinehurst No. 2 208 million liters of water used, since the redesign it’s about 57 million liters a year.

Kaymer wins the US Open here

Nevertheless, the course has the quality of a major course: Martin Kaymer won the US Open here in 2014. The greens were fast and hard, the fairways were dry but in very good condition. The greenkeeping team did not cause the drought on purpose – the little rain before the major tournament was the cause. When the women’s US Open took place a month later, the course was significantly greener – it had simply rained more.

This new approach to greenkeeping was astounding and unusual for America’s golf scene, garnering plenty of attention – but also winning the 2014 Green Star Awards for Outstanding Environmental Practices . “Learning how to do it without water” was the headline in the specialist magazine Golf Digest in an article about the new method at the time.

Pinehurst has come to appreciate this approach. Bob Farren’s greenkeeping team now has plenty of expertise in dealing with little water.

Pinehurst No. 2 is still one of the best places in the world. In the current ranking of golf.com, the classic is listed at position 16. Just first class! This also works with little water.