There is no winter break. “Now we have to do it,” says Michael Weichselgartner , founder and operator of the Valley golf course with 36 holes in the Munich area, which also takes part in the DGV certification program Golf and Nature . “We have to brush out the wild growth, we remove around 1000 plants a year from the areas that are kept as extensive areas.”

There are plenty of these on the golf course, which stretches across the Upper Bavarian foothills of the Alps in the district of Miesbach. When the golf holes were created on the relatively flat 154-hectare site, the creation of site-appropriate biotopes was a requirement. 30 hectares of rough meadows, 20 hectares of species-rich extensive areas , 30 hectares of sage and smooth oat meadows, fescue and red bent grass lawns and four different wet biotopes were created.

For Weichselgartner, who studied biology himself, it was clear from the start that it would take years to develop after the opening in 2009. “Basically, this means a lot more work for the greenkeepers than many people think.” Bush clearing of the areas is part of it.

How have the areas developed after about a decade, how do golfers view them and what influence do they have on the image of the golf course? Questions that Weichselgartner pursues in a variety of ways. Constant cooperation with the Lower Nature Conservation Authority is one way, cooperation with the local LBV is another. Finally, in 2018, as part of a cooperation between the Technical University of Munich and the German Golf Association , a master’s thesis on the “Condition and development potential of the high grass areas “Roughs of the Valley Golf Course” was created, which ultimately also included the design of an adapted maintenance model.

Sarah Augustin, author of the work, analyzed the site with the help of vegetation photographs, biomass and soil samples and compared the results with the theoretical model of the British ecologist JPGrimes, which relates the biodiversity of a site to the biomass.

The recording of the species on the Valleys site confirmed the Briton’s thesis: “The number of species was greatest with an average amount of biomass.” What sounds theoretical means the following in practice: 175 plant species were recorded, 17 of which were legally protected and/or Red List species. And there were even surprise finds such as the centaury, which was not included in the seed mixtures used at all, but is now also found in the facility. Otherwise, the selection is large: Carthusian carnations, silver thistles, the small and large burnet, the cross gentian or the musk mallow are just a few of the species represented. 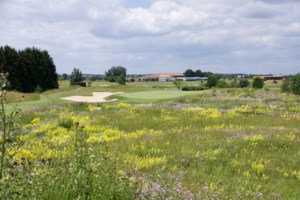 “There’s just a lot more in the meadows than you actually think,” sums up Weichselgartner. “Plants have settled here, that I hadn’t seen even as a child.” Their promotion therefore remains important for the golf course, the precise coordination of the care concept, which is partly based on the master’s thesis, is decisive. The mowing changes depending on the soil conditions and location.

“Many of the newly created areas have developed splendidly in the meantime,” confirms Josef Fass, specialist for nature conservation from the Miesbach district office , attesting to the golf course’s excellent work. “In the meantime, the authorities and also the local environmental protection associations are fully behind us,” explains Weichselgartner. “We first had to prove that we weren’t constantly fertilizing and spraying glyphosate.”

The golfers themselves now appreciate the natural design of the extensive areas. The colors of the different areas are enormous and with the number of plants, the biodiversity of birds and insects has also increased. “For example, we have 30 different dragonfly species here,” says Weichselgartner, who is already planning the next project for 2021. He wants to “settle the blue, and it’s pretty complicated.”

Condition and development potential of the high grass areas “roughs” of the Valley golf course – adaptation of the maintenance concept, master’s thesis by Sarah Augustin, TUM, chair for renaturation ecology, Prof. Dr. Johannes Kollmann, 2018; A cooperation between TUM and DGV.

MGC part of the international STERF project
Scroll to top