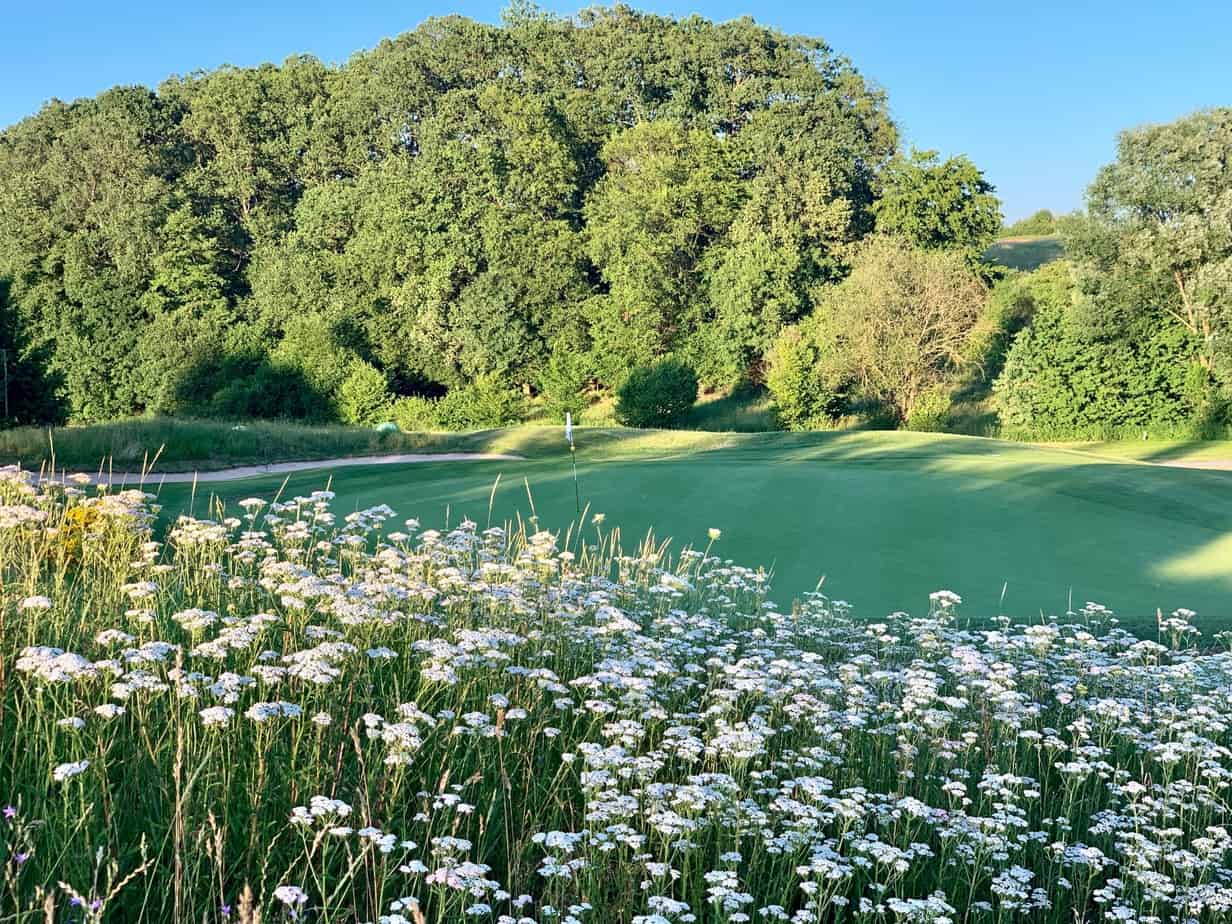 “You have to be aware that nature doesn’t need us, but we do need nature” – Bernd Dürrbeck sits on the bench next to the putting green of GC Herzogenaurach and takes stock. The GC Herzogenaurach is a sporty club, tried and tested in the Bundesliga. The facility became well-known for the creation of 18 new holes in 2003 and for the long-standing strong local presence of the adidas subsidiary Taylor Made. When people talk about GC Herzogenaurach, they often don’t first think of the landscape in which the golf course is located, but rather of the sports industry around the corner.

“Sustainability and profitability belong together”

The topics for the club are now of central importance alongside classic sport. For Dürrbeck, who represents the club as its president, sustainability in the golf club now means much more than just building new nesting boxes or looking at the great meadow with the Carthusian carnations: “It’s labour law, it’s digitization, it’s machines, it’s the issue of eco-points or compensation areas.” Finally, there is the issue of money.
The “Golf and Nature” program and the topic of sustainability in golf are closely linked to solid economic management of the golf club: “If we, like now, digitize drive forward, I can manage the staff better and at the same time offer the golfer more service, for example with the indoor course, because he can easily handle many processes via PC Caddy.” With the better digital equipment of the irrigation system on the greens, the irrigation is better controlled the moisture values would be determined, ultimately the condition of the greens would be improved in the long run because the water balance could be better regulated.

And then the meadows… Dürrbeck begins to tell. One notices that he has gotten his bearings on the subject of flowers, compensation areas, periodically wet areas, eco-points . “We have converted 2.5 of 70 hectares into flowering meadows. The areas have been significantly upgraded.” That’s great, of course, says the President, “but the seeds alone cost 6.000 euros.” A support association has been taking care of raising donations for youth and environmental concerns at the GC Herzogenaurach for two years. On the ninth green, Dürrbeck posted himself for a while in 2019 and sold bags of wildflowers for five euros each.
The vision of those responsible for the club is simple: “We want to remain the sportiest sports field in the region, but at the same time we want to get people excited about the topic of nature.” They have 70 species of birds on the field, and in 2019 the club won the environmental prize of the German Golf Association. Meadow orchards were laid out, and a lot of time was invested in environmental education in the region.

Over time, Dürrbeck thinks, it would be nice if this investment would also pay off financially for the club. In that regard, gives him Gunther Hardt, responsible for the “Golf and Nature” project at the German Golf Association, is right: “Some clubs in Germany, such as Herzogenaurach, have upgraded their compensation and extensive areas to such an extent that one would have to think about removing the compensation areas or the possibility of subleasing them to other industries.” At the moment, according to Hardt, the extensive and compensation areas are being upgraded entirely through the club’s finances, while agriculture or other branches of industry receive considerable state subsidies in some cases. “We need changes in the law here so that sports facilities such as golf clubs can also benefit from their commitment.”

This would be a welcome relief for the GC Herzogenaurach – just like for numerous other golf courses in Germany. Even golf courses that did not have to lease compensation areas or designate extensive areas for a permit could benefit from their environmental efforts in this way. “Numerous companies from industry have to provide evidence of compensation areas for new warehouses or production facilities. If a golf club could sell high-quality areas to Aldi or Lidl for a fee, that would be a new source of income,” Hardt sums up.
Changes in the law and a new assessment of the golf course by German ministries are just as necessary as advance payments from the golf clubs. Only if the areas are really high-quality and valuable could they ultimately also be considered for nationwide funding programs, for example for biotopes.
The conversion of simple meadows into nutrient-poor grassland or biotopes often takes years, a lot of perseverance – and finally a little passion for nature. In any case, the GC Herzogenaurach has apparently internalized the topic: Bernd Dürrbeck is sitting on the bench by the putting green and counting down the locations of the meadow orchards just as precisely as the latest analysis methods on the greens. “We’re going to pull this through,” he says at some point. “We are a sports area here, but without nature it just doesn’t work.”