Premiere for golf: For the first time a golf club has now become a member of the United Nations project UN’s Sports for Climate Action. The Sentosa Golf Club in Singapore joins an illustrious list of other sports representatives. The All England Lawn Tennis Club in Wimbledon is also committed to the project, as are the New York Yankees and La Liga . In Germany, for example, the German Ski Instructors Association is a partner of the UN. The Eisbären Berlin, the Norddeutsche Regatta Verein, the Vfl Wolfsburg, the DFB, the Deutsche Snowboarder Verband and the DSV are among the 140 members.

In the field of golf, the current program partners are the Waste Management Phoenix Open golf tournament, the International Golf Federation and the United States Golf Association.

In the past two years, the Sentosa Golf Club has repeatedly caused a stir with sustainability programs and underpinned its efforts in this area through a partnership with the GEO Foundation and the development of its own Game On campaign. This also includes cooperation with the R&A 2030 Golf Course Initiative campaign, which also deals with the consequences of climate change, scarcity of resources and playing conditions.

“We have worked intensively on the topic of sustainability over the past two years and are therefore proud to be part of this initiative,” summarized Andrew Johnston, General Manager of the Sentosa Golf Club at the signing. “We believe it is the right step for us as a club to tackle the issue of climate change around the world and in golf.” 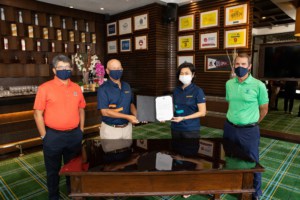 The signing of the certificate took place in the clubhouse of the Sentosa GC with the President of the Sentosa GC Andrew Lim, SDC Chairman Bob Tan, SDC CEO Thien Kwee Eng and General Manager Andrew Johnston (left to right).

This is how it works: LBC tournament series takes place plastic-free

Meike Bambach, Hotelière of the Year, on the subject of sustainability in the...
Scroll to top Cookie Consent with Real Cookie Banner