Is an e-charging station on the golf course a must – yes or no? The stronger the trend towards the electrification of cars, the louder the discussion about whether the e-charging point next to the clubhouse should be standard. After all – according to one of the main arguments of the opponents of this solution – you can’t fill up your car with diesel or gasoline at the golf club either. If a golfer decides to buy an electric vehicle, he or she must take care of the charging themselves – not the golf club.

The golfer himself and many a golf club see things differently: the Golf Management Group in England found in a 2021 survey of English golf clubs that 87 % of the facilities planned to install e-charging stations within twelve months. In a study conducted by Golf Sustainable and the University of the Federal Armed Forces in Munich in the summer of 2022, 26.30 % of golfers answered in the affirmative to the statement, “I expect an e-charging station at the golf facility.” This is even though only 14.26 % of respondents drove an e-car.

“In our sustainability plan, we advocate the installation of e-charging points at golf facilities,” also sums up Emma Huggins, sustainability manager at England Golf. Europe’s largest golf association considers the topic of electrification to be important in general because this in turn, has a significant impact on the carbon footprint of golf facilities. 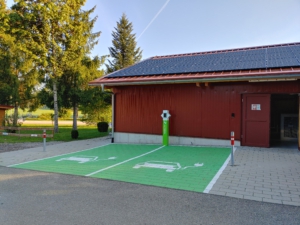 On the one hand, installing e-charging stations is about providing a service for the golfer – but if you think further into the future, you end up wondering how golf solves its mobility problem. While the CO₂ balancing of professional golf tournaments in recent years has made it clear that fan and player transportation is by far the biggest driver in the CO₂ balance, the topic of CO₂ balancing of club golfs is still in its infancy. However, initial studies also show here that the arrival and departure of golfers in a classic car that runs on fossil fuels quickly hurts the bottom line.

Swiss Golf commissioned a life cycle assessment and eco-efficiency analysis in 2021, which included six golf courses, all of which were certified by GEO. It became apparent that “in the area of mobility, the arrival and departure of the golfers (15 km each way)” accounted for the largest share. The German Golf Club Neuhof, a 27-hole facility in the greater Frankfurt area, published its corporate carbon footprint for 2020 in early 2021. Here, members’ travel to use the golf facility was identified as the second-largest source of emissions. 18.7 %, a total of 76.9 t CO₂, was attributable to this area. The higher the proportion of members who drive an e-car and ideally fill it up with green electricity, the more positive it is for the CO₂ balance.

There are now some actions that should lead to better equipment for golf courses with e-charging columns. Scottish Golf, together with Forev, a provider of e-charging columns, launched 2019 the installation of more than 1000 charging stations at the affiliated nearly 600 golf clubs. This should facilitate access to charging stations not only for golfers but for the population in general. However, due to the Corona pandemic, the 1000 charging points have not been completely installed to date. At England Golf, £50 per fuel pump installed goes toward England Golf’s Junior Golf program.

In Germany, where e-vehicles accounted for 11.9 % of new registrations in the third quarter of 2022 alone, e-stations are now standard at many golf facilities. The Association of Leading Golf Clubs of Germany, which includes 38 of the leading golf courses in Germany, regularly queries the proportion of e-charging stations. More than 50 % of leading clubs now offer e-charging stations, although this requires five-figure investments.

“You definitely have to reckon with 10,000 euros per charging pole, including the complete infrastructure,” explains Wolfgang Michel, managing director of GC München Eichenried, the venue of the BMW International Open, which now boasts five charging poles in the car park. After all, a sufficiently strong power supply must first be established to make the charging stations, which usually supply 11 or 22 kW, functional. However, the feedback on the charging stations is very positive: “The days on which all charging stations are occupied are increasing. I’d say it’s getting pretty busy in the meantime.”

It remains to be seen how the equipment of golf courses across Europe with e-charging stations will develop. Finally, a strong north-south divide can already be observed in the registration of e-vehicles, for example, within Europe. While countries such as Norway have a very high percentage of e-vehicles, Italy is pretty low.

The majority of e-car drivers still charge their cars at home. This is the most convenient and cheapest for most users. But: For many golfers, the golf club is their second home – so it’s quite possible that the e-charging station is also taken for granted.