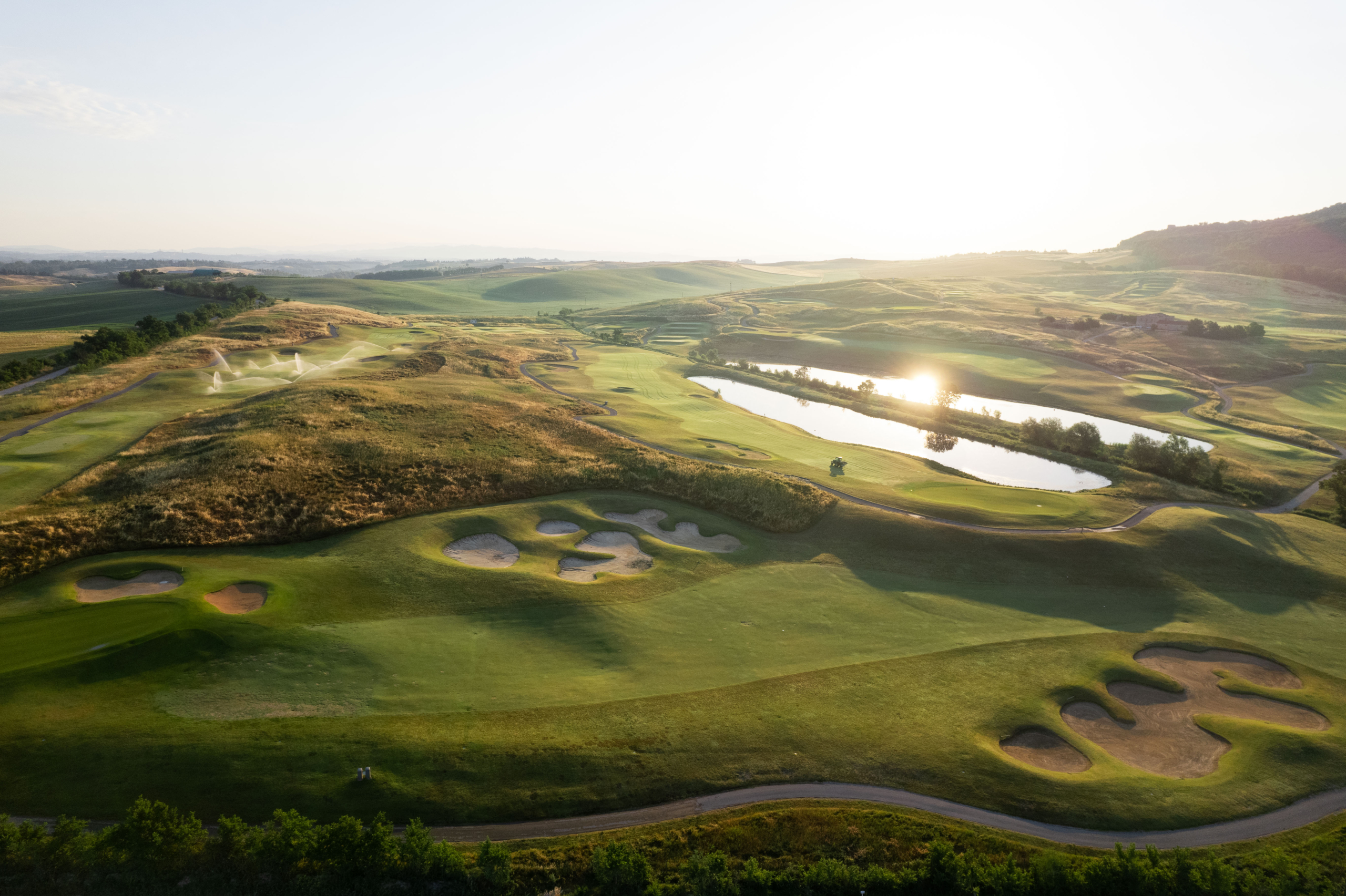 The water becomes more expensive, it becomes less. The energy to run the pumps is becoming increasingly expensive, and climate experts agree that heat waves and droughts like those that have occurred in Italy over the past two years will be more frequent in the future. The circumstances for operating a golf course are changing. So strong, in fact, that Italy’s golf courses are in a state of upheaval right now.

Is Bermuda grass the savior?

Bermuda grass is on the rise. The cool season grasses that have been common to date are discarded on the fairways. “Especially after the last two to three extremely dry summers, and given the fact that we have to work without herbicides, we realized that you can’t produce good quality grass anymore.” Alessandro De Luca, Head of the Green Section of the Italian Golf Federation, has completed the changeover at its own plant in Golf della Montecchia near Padua ten years ago. “It was the right decision,” he says today.

Montecchia is not the only club that has recognized the signs of the times. The hot, dry summers have made one thing clear to many operators. If you want to deliver good quality with the previously common cool season grasses, you must have access to large amounts of water and also have a lavish budget. The consumption of 150,000 m³ of water for 18 holes, which then certainly occurs, is no longer justifiable in view of the general water shortage in southern Europe.

Not only is the water expensive if it does not come from the company’s own ponds, but also the electricity for the sprinkler system. If neither is present, the fairways and semiroughs present a pitiful picture. The grass dies, bare patches form, weeds emerge. “Many plants have had to reseed completely every year,” De Luca explains. This also costs money. In addition, there are complaints from members and green fee players about the poor quality of the golf courses. First of all, the golfer doesn’t care what grass he plays on or where the water comes from. What matters is that it looks good and plays well.

At Royal Golf La Bagnaia near Siena, it’s early December as we talk to General Manager Martin Shaw about water management and grass. The view from the clubhouse is of Robert Trent Jones Jr’s excellent 18-hole course, which opened in 2011 and was laid out with Bermuda grass from the start. Between the holes you can see the five lush lakes where the rainwater is collected in winter. “We’ve been really fortunate this summer because we’ve had very good playing conditions the whole time and a lot of other courses in the area haven’t because of the heat,” Shaw sums up. An on-site spring is available for emergencies, and the head greenkeeper keeps water consumption low anyway thanks to constant moisture measurements. Irrigation is adjusted daily, and the course has coped recognizably well with heat and drought.

The tourist and the brown grass

The brown shade of Bermuda grass, which goes dormant in winter, is not perceived as a problem here. Overseeding, Shaw said, is not an issue for La Bagnaia because they close for about six weeks anyway. However, it is precisely the color that many other operators of an Italian plant definitely struggle with. “Regions such as Lake Garda, Milan or Abano Theme have many greenfee guests from Germany, Austria or Switzerland in winter,” explains Alessandro de Luca of the Golf Association. The majority of these golfers do not realize that the brown shade does not represent a loss of quality. If a patch of dark green Poa Annua or possibly weeds is mixed in at one point or another, the blotchy appearance quickly becomes a problem. “After we work here in Italy without herbicides, many clubs then rely on overseeding in the winter,” the agronomist sums up. It still remains the more economical solution for the clubs because they save on water and energy.

The transformation process for Italy’s golf courses is still in its early stages. From the first five plants La Bagnaia, Frassanelle, Bologna, Le Fonti and La Montecchia has now become a larger group, which, for example, also the Roman squares Le Nazionale, Parco di Roma, Castelgandolfo and Olgiata includes as well as Chervo Golf on Lake Garda. The Universities in Siena and Florence together with the Green Section of the Italian Golf Federation, are supporting the process with a study on the adaptation process. Local greenkeepers are also starting to adjust.

None of this is easy: after all, golfers want to be on their course year-round, and an extended closure for seeding new grasses is rarely accepted. “The management of the grass is also different because it only has one strong growing season a year,” de Luca explains. “The greenkeepers have to adjust to the new grass first, gain experience.”

The trend is probably unstoppable. Climate change is putting pressure and the economic arguments are also in favor of moving away from the old. Water and energy conservation are high on the agenda. In a country whose golf courses live strongly from tourism, harmony must be achieved between quality, profitability and sustainability. Sometimes just a different type of grass can help with this.

Whinchat appreciates the golf course as a breeding ground