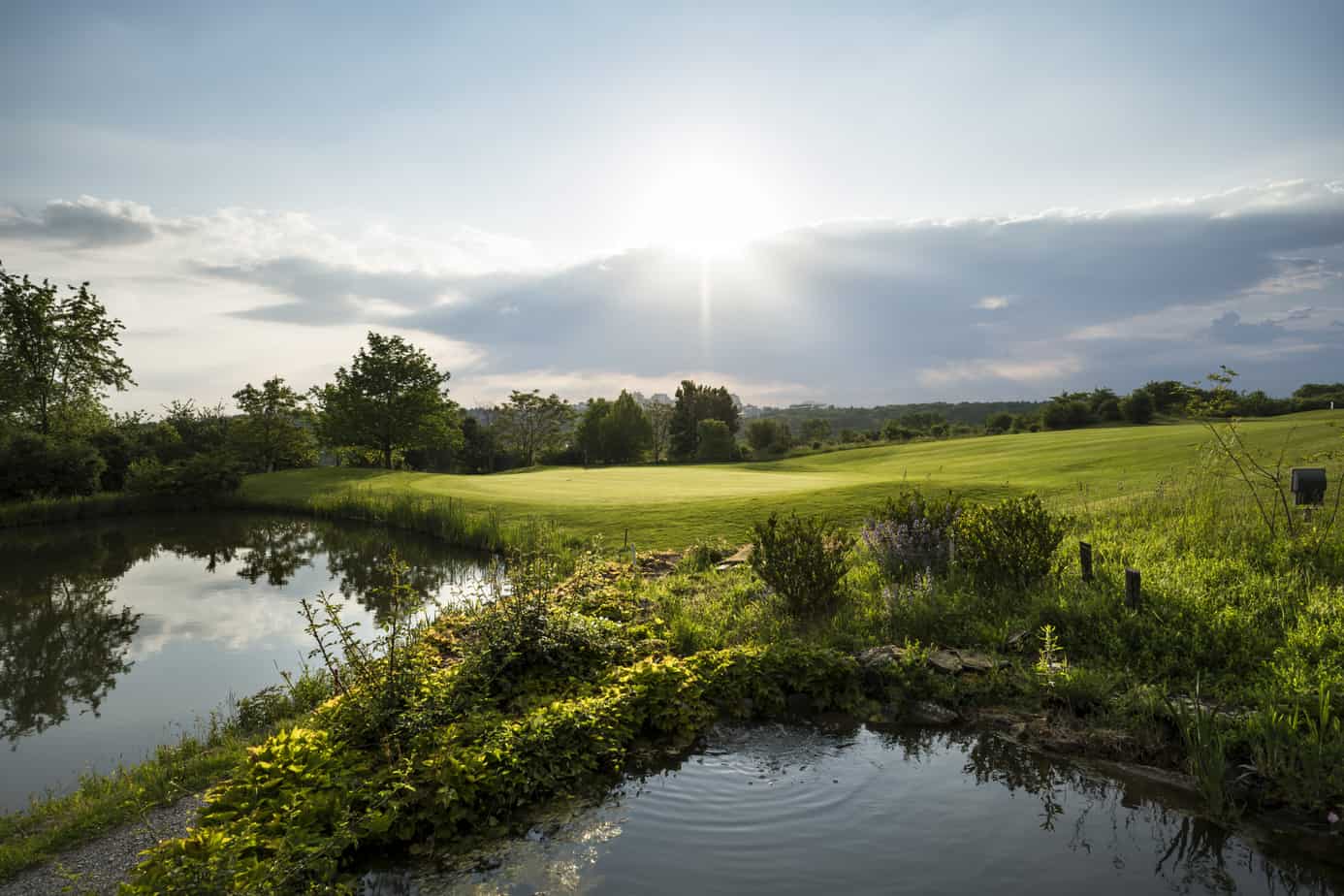 In the spring, the wind howls loudly over the ridge of the Franconian dry plateau, on which a large part of the fairways of the Würzburg Golf Club stretches. From here you can see parts of the city of Würzburg and the Marienberg Fortress. “The ground dries out quickly here,” explains Head Greenkeeper Marius Cazan . The careful use of water was already an issue in this dry area when the facility was built in 1994. “Resource conservation is extremely important to us,” affirms Club President Bernhard May , who has spent a lot of time on water negotiations with the city of Würzburg in recent years.

With an area of 56 hectares, of which around 30 hectares are played, the golf course does not have a huge area. The fact that it is sometimes quite hilly does not make things any easier. However, the compensation areas have developed excellently in the last 25 years. Dense hedges, networked areas of retreat and newly created flowering meadows make the golf course a gem in terms of biodiversity.

Certificate golf at “Golf and Nature”

The GC Würzburg takes part in the Bavarian Blühpakt . In the “Golf & Natur” program of the German Golf Association, the course has been certified with the gold award since 2019, and this award was confirmed again in spring 2022. “Once you understand what this quality management program is about, you can actually work your way up,” sums up Bernhard May. He appreciates the clarity of the program, especially when it comes to occupational safety, communication and the documentation of care measures.

For his greenkeeper Marius Cazan, Golf & Naturehas also become a kind of course on biodiversity over the years. Due to the frequent visits of the DGV consultant Dr. Gunther Hardt, the club received suggestions for the development of high-quality areas, which were gradually implemented.

Lean grassland as a large habitat

A little inconspicuous and scruffy at first glance, but in fact the flagship of the entire facility is a large nutrient-poor grassland area of over 10,000 square meters. It is the habitat of orchids, lizards, numerous species of birds and insects. Piles of dead wood can be found here as well as stone bars. The stony shell limestone in the soil mixed with sand also ensures an abundance of wild bees.

“When I started here as a greenkeeper, I didn’t really know much about biodiversity on the golf course,” explains Cazan. “It’s now a field of work that I look forward to every day. Here you can achieve a lot with small resources, even if you haven’t learned the subject from scratch.” Woodpecker, gray heron, hare or yellowhammer, which you can see here again and again. A biologist has just discovered another species of orchid on one of the nutrient-poor grassland areas.

The members of the Würzburg Golf Club are now quite familiar with these topics, which is also due to the fact that greenkeeping topics are constantly communicated both on the homepage and in the newsletter. “It was certainly a learning process for the members, but now our golfers are pretty well informed on topics such as water management or green maintenance,” May concludes positively.

It was only last year that greenkeeping resorted to new approaches with biological fertilizers and pest control. Cazan draws the first positive conclusions: “I’m surprised by the results. We got through the winter very well and hardly have any snow mold.”

Due to the high playing frequency in the club, which is one of the Leading Golf Clubs of Germany, resilient, healthy greens are crucial. In addition, non-golfers always view the golf course critically when visiting the public restaurant. Careful treatment of the environment is also important in terms of external impact. However, the GC Würzburg cannot complain about image problems anyway. The mayor of the city of Würzburg, Christian Schuchardt, described the golf course in 2019 as the third Würzburg state garden show.